It was 2001, and it was going to be Will Bartholomew’s year. At 22, he had just been signed as an undrafted free agent for the Denver Broncos, determined to stand out out in training camp.

Then he blew out his knee.

“I was pissed,” Bartholomew tells CNBC. “I felt like I should be playing, and I felt like I was better than a lot of people that were playing. I think most players feel that way.”

But what seemed like a huge setback was an opportunity that changed Bartholomew’s life.

Bartholomew went home to Nashville to heal from his injury and get back to the NFL, but he couldn’t find the kind of program he needed.

“I was like, man there’s nowhere to train like I did at the University of Tennessee,” says Bartholomew of the NCAA Division I-caliber training he had received while playing fullback for the Volunteers. “You need a coach, you need to be able to train aggressively.”

Instead, he found himself working out at a community center. “I was power [lifting] and was being all loud and the general manager asked me to leave. I was like, there needs to be a place like … at a D1 school. And that’s where the idea got birthed.”

The idea was for D1 Training, fitness facilities that provide custom sports-based training programs to help people achieve their sports and fitness goals – something more focused than an average gym but more athletic than CrossFit.

Today, D1 has 36 facilities across 25 states and brings in $20 million a year in revenue.

WHERE IT ALL STARTED

After the injury, Bartholomew says he had a chip on his shoulder. But “that helped me with the business in the early days. I was like, ‘I gotta make something of myself.’ So I gotta do something with this.”

Bartholomew had started training some local middle school athletes. Suddenly everyone wanted to train with him. So he wrote up a business plan and took the $30,000 in insurance payments he’d received when he injured his knee.

He leased a 2500-square-foot facility in Franklin, Tenn., bought some weight equipment, laid turf and hung speakers himself.

“It just kind of took off from there,” he says.

But he was wholly unprepared for the realities of running a business. “I was an idiot,” Bartholomew says of himself at the time. “I had people mailing me cash…. I didn’t even know there were remote deposits. I mean, just being a kid and not knowing.”

Passion and work ethic drove him forward. He was at work by 5 a.m. every day and stayed late at night. For two years, Bartholomew drew no salary from D1 and instead invested everything back into the business.

There was a move Bartholomew made that he still considers one of his smartest and best: enticing his former Volunteers teammate Peyton Manning to become a partner in his Nashville facility in 2005.

Bartholomew told Manning, who was then quarterback of the Indianapolis Colts, about his business, and Manning wanted to be a part of it. 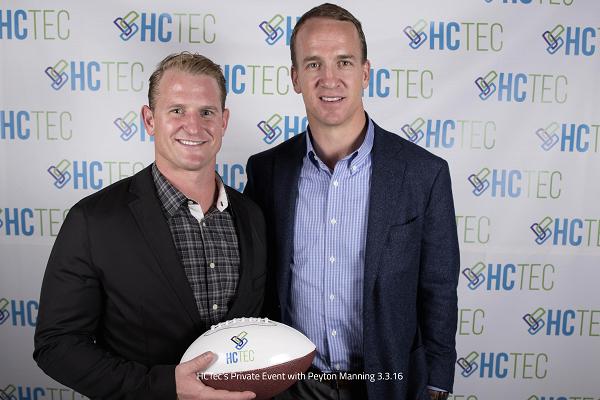 “He has a big heart for community and for people achieving their goals, and so for me I was like, ‘This is a no brainer,'” Bartholomew tells CNBC. “You got a guy who can team up with you who represents everything you’re trying to teach, so from a marketing standpoint it aligns, and from a partnership standpoint aligns, so just made all the sense in the world.”

Bartholomew remembers being on the phone with his father, a lawyer who started his own firm. “He said, ‘These are the types of partnerships that will benefit you the rest of your life.'”

Manning, “as the great entrepreneur and great man he is, he was like, ‘Hey, I’d love to own them all,'” Bartholomew told the Denver Post. “I said, ‘Man, that’d be really cool, but I think some other athletes would love to own some in their cities.'” So Bartholomew started to open facilities in different and found other pro athletes looking to get involved with D1, like Chargers quarterback Philip Rivers and then Greenbay Packers linebacker A.J. Hawk.

It was working. By 2006 Bartholomew was taking home “significant wealth,” which enabled him to move his family into a nicer home and to donate more money to his church. But he still wanted more.

“My dad was super successful, I went to a private high school, I’ve never been without, so [I’m not] the kid who never grew up with anything and made it something awesome. That’s not my story,” says Bartholomew. “My story is, I didn’t want to take anything; I wanted to make it on my own. I wanted to be independent at a very young age. That’s just the way my mentality is.”

“I had an amazing time, an amazing ride,” says Bartholomew. “When the market was contracting, I was expanding and opening more locations. … I was able to get a great lease or I was able buy real estate super cheap,” he explains.

Eventually Bartholomew had so many inquiries from athletes wanting to open D1 facilities that he couldn’t accommodate them all. “I didn’t have the structure and the model set up to really expand,” he says.

“I’ve always had kind of a big vision,” says Bartholomew. “Maybe it’s just cause of the way I’m wired, but I’ve always wanted something bigger.”

Bartholomew spent six months trying to figure out his next move. The answer he landed on was franchising.

He converted many of his existing partnerships and now sells franchises to “people who are in line with [his] core values and super passionate,” for $300,000 to $500,000. Currently, D1 has 32 franchise locations and four corporate ones. There are 10 more in development.

To Bartholomew and the players he works with, D1 Training franchises are an opportunity “to not only step up and gain ownership, but step up in responsibility,” he says. “We’ve seen revenue skyrocket in a lot of locations because [the athletes] are jumping in … because it’s theirs.”

Today, D1 Training has elite players like Tim Tebow and Herschel Walker as franchisees, and Carmelo Anthony is coming on board soon.

In hindsight, Bartholomew can see many things — including how founding D1 was a better fit for him than the NFL probably ever could have been.

In football, Bartholomew was a fullback. “I was the guy who blocked everybody and whose name would probably never be said on the TV and that was alright. So for me, what was always frustrating was, I was playing an important role on the team, but I was never the guy with the ball in my hand,” he says. “And I’m somewhat opinionated, so I like to be the guy who has that ball in his hand. I love that pressure.

“What I’ve found with business and with this business is that it hits all my passions. My wanting to help people and give back, my passion for actually working out and then my passion for being in control of my destiny,” says Bartholomew. “It really scratched all those itches.”

Now at D1, “We are able to watch people’s lives change drastically — not just physically, but mentally… It just gives you so much pride and a sense of accomplishment. It makes me want to do it again and again and again,” he says. “I’m so passionate about it.”

THIS ARTICLE ORGINALLY APPREARED ON CNBC.COM