A FITNESS FRANCHISE THAT'S A STEP ABOVE THE REST

Will Bartholomew’s passion is to bring the experience of professional and collegiate athletes to everyone everywhere through his fitness franchise. A Nashville native, Bartholomew spent four years setting the pace for the offensive line of the University of Tennessee Volunteers. By 2001, it seemed a professional football career was all but certain, and as an undrafted free agent, Will started to practice with the Denver Broncos. 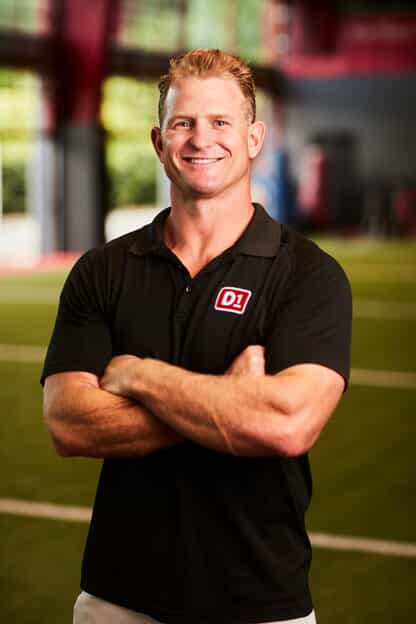 Then, shortly before the season began, the unthinkable: the SEC standout went down in practice with a career-ending injury, essentially tearing every ligament holding his knee together. He came home to recover and map out the rest of his life, and it wasn’t too long before he was missing the turf and training of a Division 1 school. At the same time, people were fascinated by his story.

“I was getting asked by a lot of people how I had made it to Denver,” Will says. “I began to feel like there needed to be a place for athletes to go, to experience the intensity of training and the coaches, breathing life in you and encouraging you to get to that next level. That was the start of D1 Training.”

Will found a small place for rent in a Nashville community, just 2,500 sq. ft. of open space. He set about doing the work himself, installing patio cover for a turf surface, laying out the weight room, painting, and whatever else was needed to get the first D1 Training location open. Will kept his ultimate goal in mind.

“What I really wanted to do was provide the general community, everyday people, the same experience I had as a Division 1 athlete — unbelievable coaching, someone to ask about nutrition, a therapist — all in the same environment where they could come and have that Division 1-styled experience that so many athletes around the country get to experience, and to bring this experience to their communities and everyday lives,” says Will, who now serves as the company’s CEO.

By 2016, just a few years in, Will had grown to 32 locations across the southeastern U.S., and he was getting inquiries from people interested in bringing D1 Training to their communities. The response was amazing to Will and his team.

“We just had so many inquiries from people in different cities wanting to be in this business,” Will says. “Franchising made a lot of sense. For us, it was a no-brainer to bring people in.”

In early 2016, D1 Training Franchise began operations. Since that time, fitness franchise locations have opened in cities and towns across the country, and hundreds of entrepreneurs are considering bringing the D1 mindset to their markets.

Want to learn more about the passionate beginnings of D1?

Will relishes being in the gym, working with athletes, and helping guide them towards their goals. Ultimately, that’s the mission of D1 Training — to help every person become an athlete, not just in form, but in mentality as well.

“It’s not just being physically fit,” Will says. “It’s having the right mindset, the ability to tackle a goal and run after it, and surrounding yourself with people in your life who are motivating you and encouraging you towards that goal.”

That’s why D1 Training clients are called athletes. Everyone has the potential to become an athlete, to live up to the aspirations of character and performance that define the D1 Training franchise. Will’s mission is infectious, too.

“I’m excited for the possibilities for these owners to change and impact their communities,” Will says. “I can’t tell you how many times I’ve had a pro athlete come up to me and say, ‘I started training at D1 when I was in high school.’ How cool is that?”

That’s the D1 Training difference. Learn more about how D1 Training stands out from the crowded fitness field.